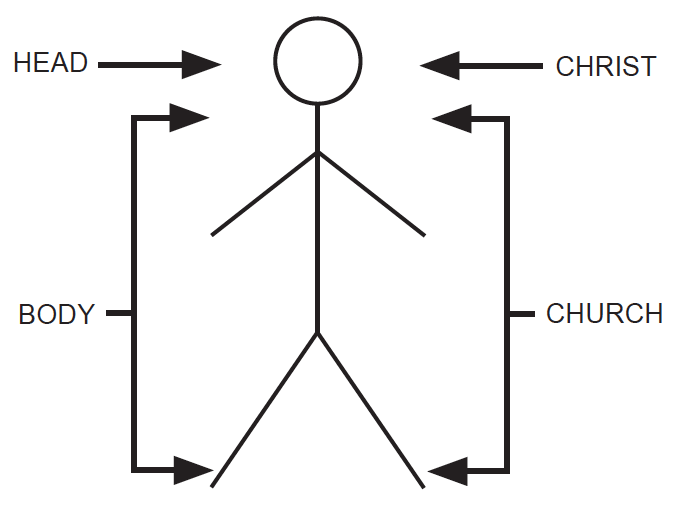 A. The church is the family of God.

C.  Romans 6:3-4 teaches we are also baptized into Christ. Baptism is when we become a Christian, a son of God, and at that same point we become members of the church, the family of God.

B. Foundation: Apostles and Prophets

C. The church is based on the Word of God only.

4. Have you ever wondered why there are so many denominations – divisions? (450 or more exist in the U.S. alone.)

A. The Bible teaches that there is one church.

B. Divisions in Christendom are either of Satan or of God.

1.  1 Corinthians 1:10-13 Division is sin, when following personalities and in time their writings (traditions of men that contradict the Word – false doctrines). Matthew 15:6-9

2.  Luke 12:51-53 ;  John 10:19-21 Division will occur and is righteous, when an individual, church or movement aligns themselves with the Word of God. The Jews considered themselves “God’s people,” yet Jesus’ words (the truth) divided them into two groups – those who opposed Him and those who obeyed Him.

C. The following are the major historical divisions in Christendom – some were formed by a noble stand for the truth (though not a completereturn), while others were departures from the truth.

1. Through the centuries the church was corrupted by traditions of men – false doctrines, such as: infant baptism, original sin, perpetual virginity of Mary, priests as clergy, papal infallibility, etc… This becomes the Catholic Church. In 364 AD the Roman Empire is split into two parts. This division leads to a split in Christianity – the eastern portion becomes Eastern Orthodox Church and the western part becomes the Roman Catholic Church. Practices diverge, for example – Orthodox has married priests, Roman Catholic priests are celibate. The Great Schism”occurs in 1054 AD, as the leaders of “each church” excommunicate each other.

2. 1500’s Reformation Movement – Martin Luther (Lutheran Church) He takes a stand against the Roman Catholic Church on these convictions: Bible authority over church authority, salvation by faith not works, and the priesthood of all believers, yet still baptizes infants. Other noted reformers were John Calvin (Presbyterian Church), Ulrich Zwingli and Conrad Grebel (Anabaptists) Anabaptists were heavily persecuted by Catholics and some reformers, because of their stand for adult baptism. Henry VIII (Anglican Church / Church of England) He breaks from the Catholic Church over his right to divorce his wife. He appoints himself head of the church. Later in the United States, the Anglican Church becomes the Episcopalian Church, since members will not follow the king of England.

4. 1800’s Restoration Movement – Alexander Campbell and Barton Stone (Mainline Church of Christ and Conservative Christian Church) Take a stand against both Catholic and Protestant doctrines of salvation. They preach to be saved one must have personal faith in Christ, repentance and baptism (immersion) for the forgiveness of sin to receive the Holy Spirit. In reaction to Catholicism, their congregations are autonomous – self-governing. (1906 is the formal split between Mainline Church of Christ, which is non-instrumental, and the Conservative Christian Church, which is instrumental.) Joseph Smith (Mormon Church) divides from Restoration Movement in 1830 over “new revelation” – the Book of Mormon.

5. 1967 Crossroads Movement (Total Commitment Movement) Controversial, though never departing from the Mainline Church of Christ, the Crossroads Church near the University of Florida pioneers evangelizing the secular campuses of United States, “counting the cost” with each person that desires to be baptized, and the shepherding of new converts.

6. 1979 Boston Movement (International Church of Christ) – Kip McKean – Baptized at the University of Florida in 1972, divides from Mainline Churches of Christ and Crossroads Movement over: Bible Church not just New Testament Church, only disciples are true Christians, each and every member of church must be a disciple, each member should be in discipling relationships, vision to evangelize the nations in a generation, the planting of new churches to achieve this vision, central leadership not autonomous congregations, and the role of women. In 2002, the International Churches of Christ return to a more Mainline Church of Christ theology – each congregation becomes autonomous (self-governing), calling a central leadership and the vision to evangelize the nations in a generation “unbiblical.” Around the world, thousands fall-away.

7. 2006 SoldOut Movement (Portland Movement / International Christian Church) Begins in Portland, Oregon as a revival movement within the International Churches of Christ. The International Church of Christ separates from the SoldOut Movement, because of the new movement’s stand on these convictions: Bible Church not just New Testament Church, only disciples are true Christians, each and every member of church must be a disciple, each member should be in discipling relationships, vision to evangelize the nations in a generation, the planting of new churches to achieve this vision, central leadership not autonomous congregations, and the role of women.

A.  Acts 11:25-26 Church = Disciples = Christians When God looks down from heaven, He sees one church – all the baptized disciples around the world, who are “sold-out” in obeying His Word. his is called the “church universal” – the one true church. ( Ephesians 4:4-6 )

C. The Greek word for church is “ekklesia” which means “assembly” or “called out”. (“Ek” meaning “out” and “kaleo” meaning “to call.”) To be a disciple is to be “called out” from the world. Therefore, the church in the Bible was the “assembly” of the “called out.”

D. There are several names in the Bible for God’s Church: Disciples, Christians, Church of God, Church  of Christ, The Way, Church of the Firstborn, Saints, etc… Since we are free to choose any name for our fellowship, since our fellowship goes around the world, and because our churches are composed of only sold-out disciples, we call ourselves the “International Christian Church.”

6. What distinguishes the International Christian Churches?  (What separates or “divides” us from main stream Christendom?)

A. We believe God physically resurrected Jesus from the dead.

B. We believe the Bible is inspired by God and is our sole authority. Therefore, since we have not departed (divided) from the truth, we consider ourselves non-denominational.

D. We believe – as in the book of Acts – the visible church should be composed of only sold-out baptized disciples.

E. “Be silent where the Bible speaks, and speak where the Bible is silent.” In applying Scriptural principles to build the visible church, we believe we must obey God’s Word, but where the Bible does not prohibit a practice or name, we are free to use our God-given creativity. Genesis 2:19 (Examples: The principles for “Bible Talks,” “Lead Evangelist,”, “Discipleship Partners” and “Regions” are in the Scriptures, though these terms are not. However, nowhere are they prohibited. Also, instrumental music and paid Women’s Ministry Leaders are not prohibited in the Scriptures.)

F. We believe in a Central Leadership. Throughout God’s Word, when His people were unified, there was a strong central leadership and godly central leader. (Examples: Moses, Joshua, David and of course Jesus and the Apostles) 1 Corinthians 4:15-17 and Titus 1:5 teaches that local congregations had an overseeing evangelist, who unified the disciples “everywhere in every church.” In the first century, congregations were a collective movement – not autonomous, not self-governing.)

G. Matthew 28:19-20 Our vision – the evangelization of all nations in this generation – will be accomplished through every disciple making disciples and every disciple having discipling relationships.

B. Be involved on a relationship level in the church. (v. 26)

A. Do not miss church.

B. The fellowship helps us to be unswerving in our commitment. (v. 23)

C. Another purpose of fellowship is to encourage each other so we will remain faithful. (v. 24)

A. 1 Corinthians 16:1-2 Paul gave a plan to set aside money on the first day of the week for the Lord and the needs of His people. Our plan is to set aside a tenth of our pay as the beginning guideline of our sacrifice on Sundays to meet the ministry needs. Benevolent offerings are given at Midweek Services.

B. 2 Corinthians 9:6-8 Giving should be from a “cheerful” heart – not under compulsion. God blesses you when you give generously.

15 He is the image of the invisible God, the firstborn over all creation.

17 He is before all things, and in him all things hold together.

18 And he is the head of the body, the church; he is the beginning and the firstborn from among the dead, so that in everything he might have the supremacy.

19 Consequently, you are no longer foreigners and aliens, but fellow citizens with God’s people and members of God’s household,

20 built on the foundation of the apostles and prophets, with Christ Jesus himself as the chief cornerstone.

21 In him the whole building is joined together and rises to become a holy temple in the Lord.

12 The body is a unit, though it is made up of many parts; and though all its parts are many, they form one body. So it is with Christ.

4 We were therefore buried with him through baptism into death in order that, just as Christ was raised from the dead through the glory of the Father, we too may live a new life.

20 built on the foundation of the apostles and prophets, with Christ Jesus himself as the chief cornerstone.

5 one Lord, one faith, one baptism; 6 one God and Father of all, who is over all and through all and in all.

4 Just as each of us has one body with many members, and these members do not all have the same function,

5 so in Christ we who are many form one body, and each member belongs to all the others.

12 The body is a unit, though it is made up of many parts; and though all its parts are many, they form one body. So it is with Christ.

10 I appeal to you, brothers, in the name of our Lord Jesus Christ, that all of you agree with one another so that there may be no divisions among you and that you may be perfectly united in mind and thought.

11 My brothers, some from Chloe’s household have informed me that there are quarrels among you.

13 Is Christ divided? Was Paul crucified for you? Were you baptized into the name of Paul?

6 he is not to ‘honor his father’’ with it. Thus you nullify the word of God for the sake of your tradition.

7 You hypocrites! Isaiah was right when he prophesied about you:

8 “ ‘These people honor me with their lips, but their hearts are far from me.

9 They worship me in vain; their teachings are but rules taught by men.

51 Do you think I came to bring peace on earth? No, I tell you, but division.

52 From now on there will be five in one family divided against each other, three against two and two against three.

19 At these words the Jews were again divided.

20 Many of them said, “He is demon-possessed and raving mad. Why listen to him?”

21 But others said, “These are not the sayings of a man possessed by a demon. Can a demon open the eyes of the blind?”

25 Then Barnabas went to Tarsus to look for Saul,

26 and when he found him, he brought him to Antioch. So for a whole year Barnabas and Saul met with the church and taught great numbers of people. The disciples were called Christians first at Antioch.

5 one Lord, one faith, one baptism;

6 one God and Father of all, who is over all and through all and in all.